The salvation of the Church

"...the salvation of the Church doth not spring from any holiness wrought in us, but from the work of CHRIST wrought for us. Not in our brokenness of heart, but in CHRIST'S bruised and broken body on the tree." (Robert Hawker, Commentary on Hebrews 10
Posted by Unknown at 11:09 AM

They do not live upon CHRIST

"I beseech you, as you value your privileges, and high calling in CHRIST; learn of GOD the SPIRIT how to estimate your safety in CHRIST. So wretchedly low at present is the tide of things, in the spiritual life of GOD in the soul, according to modern profession, of what some men call the Gospel; that in this land, where once it stood at high water mark, it is now nearly gone out, and left our shore at the lowest ebb. They do not live upon CHRIST, but upon their own self attainments. And while any thing in self, can be found to satisfy their minds, they are at ease; though they have no communication, from the ocean of CHRIST, in those streams, which alone can truly make glad the city of GOD, Psalm 46:4." -Robert Hawker, Commentary on Hebrews 3
Posted by Unknown at 6:45 AM

Think of your mercies

"Reader! do you know the LORD? If so, think of your mercies, and rightly make use of them; amidst the present sinful and adulterous CHRIST-despising generation! Will you be cast down, because of the temptation, and have your soul discouraged by reason of the way? Oh! blessed be the way, however tempted it may be, if it thereby leads the soul, more frequently, more closely, to JESUS. Darkness is a mercy, if it drives me to JESUS the light. Poverty of soul is true riches, if my pinchings endear his enlargements! It is blessed to know, and blessed to feel, all spiritual wants; to make the soul more sensible, that there is no fulness, but in JESUS. LORD the SPIRIT! cause my soul then to live upon CHRIST!" -Robert Hawker, Commentary on Hebrews 2
Posted by Unknown at 5:58 AM

Surely I will tell all the world

"...is it so, (oh! thou blessed LORD,) that thou art not ashamed to call thy people brethren? LORD! grant that I may never feel that false pride, and be ashamed to call thee so! Surely I will tell all the world, whose I am, and Whom I serve; and say to all I meet, JESUS is not ashamed to call me brother." -Robert Hawker, Commentary on Hebrews 2
Posted by Unknown at 5:52 AM

The Remembrancer of CHRIST JESUS

"Reader! here is one of the sweet offices of GOD the HOLY GHOST, particularly endeared to us. You, and I, are forgetful of divine things. JESUS saith, that the HOLY GHOST shall bring all things to our remembrance, whatsoever he himself hath said unto us, John 14:26. And shall not you and I look up to that gracious, and loving Teacher, and say, LORD! be thou the Remembrancer of CHRIST JESUS; that none of his precious words, and the glorious things belonging to his Almighty Person, and offices, may at any time slip from our minds?" -Robert Hawker, Commentary on Hebrews 2
Posted by Unknown at 1:30 PM

"...we are said already by faith to sit together with CHRIST in heavenly places, Ephesians 2:6, so that the justified believer in CHRIST is now by faith, already in heaven, with his glorious Head: and shortly will be there in person. For so the promise runs: Where I am; there shall ye be also, John 14:1-3. To him that overcometh, will I grant to sit with me in my throne; even as I also overcame, and am sat down with my FATHER in his throne, Revelation 3:20." -Robert Hawker, Commentary on Hebrews 1
Posted by Unknown at 11:37 PM

Send down, O Lord, the choice effusions of thy Holy Spirit

"Jesus! we hail thee, as our risen, and ascended Savior! Thou art indeed gone up on high: thou hast led captivity captive, thou hast received gifts for men: yea, Lord, in the manhood of thy nature, thou hast all grace for men, even for thy rebellious children, that the Lord God might dwell among them. Send down, O Lord, the choice effusions of thy Holy Spirit; and remember Lord thy promise, in which thou didst say: I will not leave you comfortless, I will come unto you. Even so. Amen." -Robert Hawker, Commentary on Acts 1
Posted by Unknown at 10:33 PM

Email ThisBlogThis!Share to TwitterShare to FacebookShare to Pinterest
Labels: Prayers

Exercise thy kind office, with my poor soul

Blessed SPIRIT of truth! Do thou, LORD, in grace, and love, and compassion, exercise thy kind office, with my poor soul, as the glorifier of CHRIST JESUS! By thy word, and by thy grace in my heart, give me to see, and feel, and know, that, like Israel, the whole head is sick, and the whole heart faint. Let me never seek justification by the deeds of the law, or presume to think myself clean in thy sight! Plead, LORD, in my heart the injured cause of my GOD, and of his CHRIST; and by such saving discoveries as thou art making to thy church, by thy blessed word, both of human corruption, and the necessity of divine cleansing; make me to know that in JESUS, and his great salvation alone, it can be accomplished; that my sins, which are as scarlet, shall be white as snow; and though red as crimson, shall be as the wool. And oh! the praises due to a covenant GOD in CHRIST, FATHER, SON, and HOLY GHOST, for the rich discovery! Blessed, forever blessed be JEHOVAH, in having brought sinners acquainted with the cause of our ruin, and the only source of our relief in JESUS. LORD! help me to seize all the gracious improvements thy mercy hath designed, from the rich salvation by JESUS. And since by his precious blood and righteousness, thou hath opened a way for purely purging away our dross, and taking away all our sin; bring, LORD, the souls of thy redeemed, through this gracious process of thy mercy, and let thy people be again called the city of righteousness, the faithful city!

Email ThisBlogThis!Share to TwitterShare to FacebookShare to Pinterest
Labels: Prayers

Email ThisBlogThis!Share to TwitterShare to FacebookShare to Pinterest
Labels: 01 Genesis 01

GENESIS
GENERAL OBSERVATIONS
THE first, and most important observation, to be made on this Book of GOD, is what our LORD himself declared, concerning the writings of the Author of it, in general; that Moses wrote of Him. John 5:46. And as the Redeemer did not say, in what part of this man’s inspired writings, more particularly it is, that mention is made of Him, (perhaps with an intention to enforce a more diligent search through all,) it should seem to be our wisdom to keep this direction in view, through every part, in going over the whole of the five Books of Moses; that we may not overlook a single passage, in our search for Him, of whom Moses and the prophets did write, JESUS of Nazareth.
Reader! I charge you to place these four words of the LORD JESUS, as a motto for remembrance, at the head of every Book, and every Chapter: Moses wrote of CHRIST. And as from this unquestionable authority, whenever we open any of the writings of Moses, we may with safety say, whether it be discovered by us or not, JESUS is here: conscious also that from our own blindness, untaught of the HOLY GHOST, we shall never find Him; how ought we to look up, for light, and direction from above, and say with David; LORD open thou mine eyes, that I may see the wondrous things of thy law!”
There is another general observation to be made upon this Book of Genesis, before the Reader enters upon the perusal of it; namely, how gracious, and condescending it was in GOD, to cause those Sacred Records to be made, and carefully handed down to us, for giving us information concerning those interesting points, without which, they never could have been known by us. May divine grace make us duly thankful for such distinguishing mercies!
In this first Book of Moses, we have brought before us the history of the creation; the original state of man as innocent; his fall, by reason of sin; the gracious promise of redemption; together with the Church’s history, in the hives of the Patriarchs, comprising a period of about 2369 years.
Reader! in observing how short an account we have of the lives of the Fathers, during so long, a period, contemplate with due seriousness, the fluctuating transitory state of man upon earth! And while the reflection suitably affects the mind, recollect no less, how sweet, and reviving the thought is, that amidst all the changing scenes of succeeding generations, in which one passeth away, and another cometh, our Covenant GOD in CHRIST, liveth and abideth forever. LORD, grant to him that writes, and to him that reads these lines, that when their hour is also come, in which both will cease from their labors, be gathered to their fathers, and have seen corruption, they may find thee to be the strength of their heart, and their portion forever.
Posted by Unknown at 9:04 PM 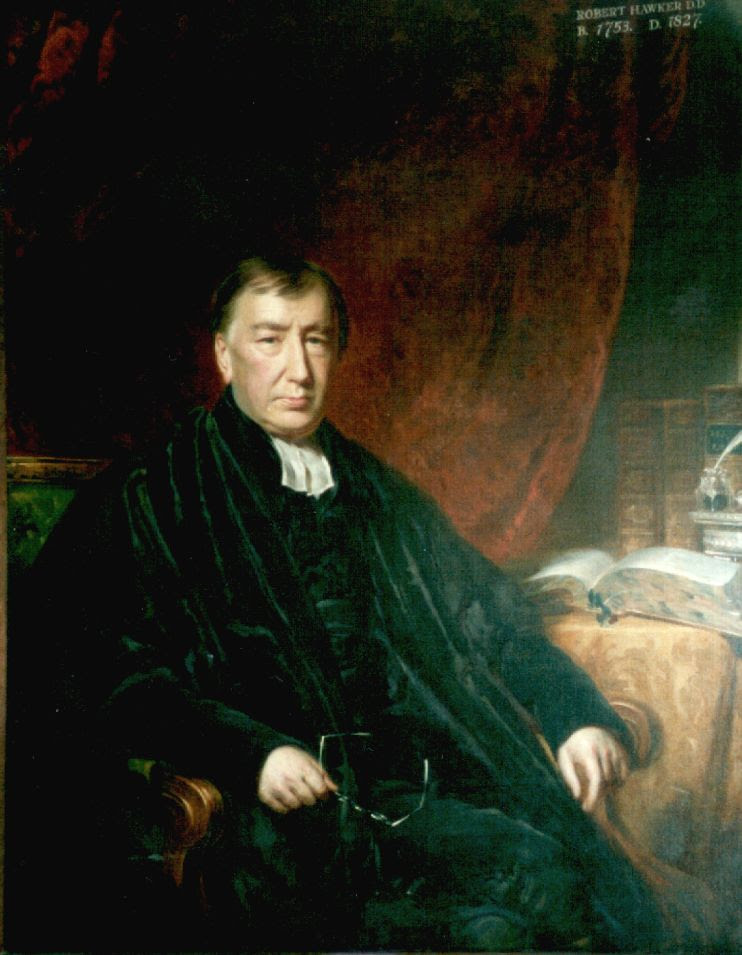